A Biography, Bibliography, and Assorted Links 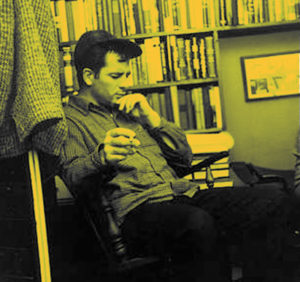 Born Jean-Louis Kerouac, Kerouac is the most famous native son of Lowell, Massachusetts. His parents had immigrated as very young children from the Province of Quebec, Canada, and Kerouac spoke a local French Canadian-American dialect before he spoke English. He was a football star at Lowell High School and upon graduation in 1939 was awarded a scholarship to Columbia University. However, after an injury sidelined him on the football team, Kerouac grew unhappy with Columbia and dropped out of school. During this period in New York City, Kerouac became friends with the poet Allen Ginsberg and the novelist William S. Burroughs, as well as Herbert Huncke and others who would be associated with the “Beat Generation.”

During World War II, he briefly joined the Merchant Marine and the U.S. Navy, and after the war, in 1947, he met Neal Cassady, with whom he would in the late 1940s begin crisscrossing the country by automobile.

Kerouac wrote his first novel, “The Town and the City,” about his struggle to balance the expectations of his family with his unconventional life, which was published in 1950 with Ginsberg’s help. Kerouac took several cross-country trips with Cassady during this time, which became the basis for his most famous work, “On The Road.” The manuscript – presented to his editor on a single, unbroken roll of paper, the scroll that was later exhibited to record crowds in Lowell – was rejected and six years would pass before it was published in 1957. In the years in between, Kerouac followed Ginsberg and Cassady to San Francisco and the term “Beat Generation,” which Kerouac coined, gained popularity. When Kerouac finally broke through with the release of “On The Road,” he was faced with challenges presented by the fame that followed as he tried to live up to the image portrayed in his novels and facing criticism from the literary establishment for being part of what was considered a fad. He would go on to publish additional novels, many of which used settings based on Lowell – including “Doctor Sax,” “The Subterraneans,” “The Dharma Bums” and his final great work, “Big Sur.” He settled in Florida with his wife, Stella Sampas, and his mother, where he died in 1969 at age 47. He was buried in Lowell.

Even after his death, Kerouac’s popularity continues. “On The Road” has remained widely read and a new film adaptation of the novel starring Garrett Hedlund and Kristen Stewart recently premiered at the Cannes Film Festival. Kerouac was named one of the most important figures of the 20th century by LIFE Magazine and The Times of London and interest in Kerouac has grown with the publication of his letters, poetry, spiritual writings, early novels and more from his remarkable literary archive. He has been cited as an influence by countless writers and musicians, including The Doors, Bob Dylan, and Patti Smith.

1950 The Town and The City
Harcourt Brace

1997 Some of The Dharma
Viking

1999 Atop an Underwood
Viking

2007 On the Road, The Original Scroll
Viking

2008 And the Hippos Were
Boiled In Their Tanks
Grove Press

2009 You’re Genius All The Time:
Belief and Technique for Modern Prose
Chronicle Books

The Kerouac Companion (character keys and family trees)Gallery of On the Road covers from around the worldGallery of Visions of Cody coversMore Kerouac book coversList of recordings relating to Kerouac and CassadyKerouac Corner – An occasional column about Jack’s life and writingsKerouac & The Outsider – A PuzzleAn interview with Kerouac’s friend, Henri CruAn interview with Kerouac’s old buddy, Seymour WyseThe Breton Traveller: Kerouac’s Search for his Roots